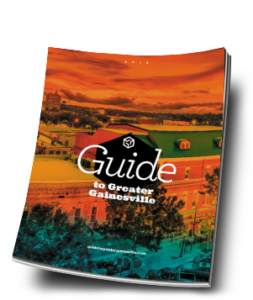 GAINESVILLE, Fla. — The University of Florida is pleased to announce that Jiri Hulcr and…

Thursday, August 13, 2020 Ground was broken and reconstruction begun Thursday on a large-scale renovation…

Dining Out in Greater Gainesville

At UF Health, we are committed to using problem-solving strategies to improve lives. As an…

by Scott Costello
Getting Settled

When this happens, it's usually because the owner only shared it with a small group of people, changed who can see it or it's been deleted.
View on Facebook
·Share

thank you for sharing

This week, we have a #TBT for all of our classic rock lovers. 74 years ago this month, Don Felder, lead guitarist of The Eagles, was born right here, in Gainesville!

Born on September 21, 1947, Don Felder grew up in a low-income family with an unquenchable love for music, even as a child. He worked at a music shop as a young man, giving guitar lessons to receive music theory lessons in return. Don must have been a wonderful teacher, because one of his students was a young Tom Petty!

As a 15 year-old aspiring musician, Don started his first band, The Continentals. In this band with Felder was fellow Gainesville resident Stephen Stills, who would later become the third member of the group Crosby, Stills, and Nash. When Stills left the band, Felder asked his classmate, Bernie Leadon, to join the band.

Leadon and Felder went their separate ways, Leadon to California and Felder to New York. After a band breakup in New York, Don got married, had four children, and headed to Boston to pursue a career as a studio musician. In Boston, Leadon and Felder crossed paths once again. Leadon convinced Don to come to California, as there would be much more opportunity for his music career there. Felder took his advice, heading west and taking jobs with multiple music groups at the time.

One casual night in 1974, Don Felder joined his friend Leadon and his band, The Eagles, for a night of music, improvisation, and grooving. Lead singer Glenn Frey, shocked, asked Felder to play guitar for their song “Good Day in Hell.” Shortly after, The Eagles asked Don Felder to join as the lead guitarist. He agreed, and so was born the legendary Eagles that we know today!

Felder would become a crucial part of the band, helping write and develop some of their most famous tracks, including, but not limited to, “Hotel California” and “Victim of Love.”

Today, Don Felder resides in Dallas, Texas with his family, still regularly performing a setlist of Eagles and solo tracks. Felder is yet another musical legend defining Gainesville’s rich history of music and the arts.

Be sure to wish him a happy birthday from his hometown on September 21!
@donfeldermusic ... See MoreSee Less

I have known him for a long time. He's a great man

Congratulations to Jiri Hulcr and Andrea Lucky with UF IFAS Solutions on winning the prestigious Fulbright Scholars Award for 2020/2021.