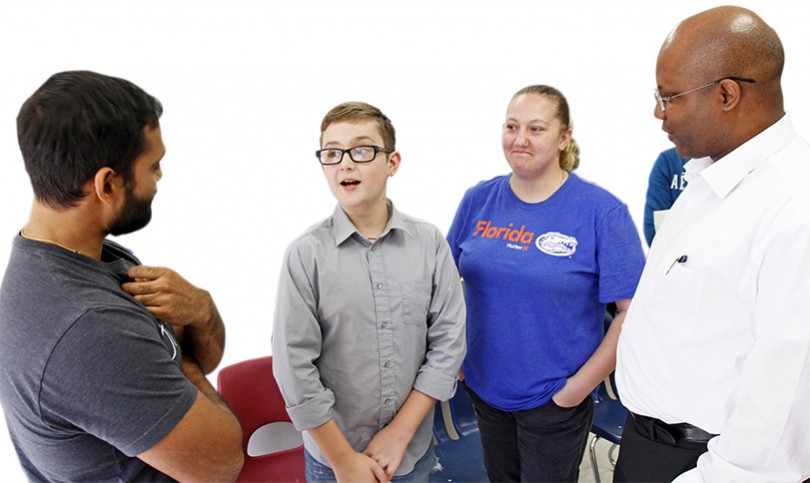 The Importance of Summer Camps & Activities for Children

He was hitched on IT when he attended the Career Discoveries Workshop at the Professional Academies Magnet at Loften High School in October. The inspiration came from two professionals in the field – Duncan Kabinu and Abhi Lokesh.

Kabinu is the co-founder of Gainesville Dev Academy, which offers boot camps on application development.

Lokesh is the co-founder of Fracture, a Gainesville company that’s highly successful in printing pictures on glass – with sales in 70 countries for millions of images.

The Career Discoveries Workshop is an example of the way community members are collaborating through the Alachua County Education Compact. Thirty organizations are working together on six goals for the compact, which the Gainesville Area Chamber of Commerce initiated in May.

In this story,  highlights efforts to meet the following two goals:

The Career Discoveries Workshop illustrates how the Education Compact is going beyond traditional approaches, said Alachua County School Board Member April Griffin. “The presenters were not school people; they are living in the field every day,” she said.

Lokesh had advice that goes beyond schooling. A wealth of help is available, if you look for training on the Internet,” he said.

“You can do so much with spending so little,” he said. “You don’t need to be a genius. It’s all about curiosity.”

While learning on your own has its pluses, so does schooling – whether it be in middle or high school, a college or university or a program such as the Dev Academy, Kabinu said.

Caleb Zinn is only in seventh grade, but he already has a Microsoft certification – in Microsoft PowerPoint – as a student in The Academy of Technology and Gifted Studies at Howard Bishop Middle School in Gainesville.

“It’s great that he has all of these opportunities so he can spread his wings and select a career – or multiple careers,” his mother, Shannon Zinn, said.

The school district is continuously upgrading its career and technical education programs.

That has been true under Tim Hayes, who is in his third year heading the Academy of Fire and Emergency Medical Services at the Professional Academies Magnet at W. Travis Loften High School in Gainesville.

Under Hayes, Brandon Nobles became the first student to graduate from the program with a level one certification as both a firefighter and
an emergency medical technician.

Nobles now is a volunteer firefighter with the Windsor Fire Department.

His plans to pursue a career in firefighting got an unexpected jump-start. That happened when he took a job that he thought was just going to provide money to pursue his education.

That job is at the Gainesville plant of SiVance. After he started at the company, Nobles began training for the chemical plant’s fire brigade, which can become a career opportunity.

“God put this opportunity in my life,” Nobles said. “I never expected it.”

Diore Tate, a junior in the Loften program,
is on her way to a potential job. She chose the Fire-EMS program over the the Academy of Health Professions at Gainesville High School.

“I love the excitement of not knowing what’s going to happen when you arrive,” she said.
Leveraging Interest in Robotics

School Superintendent Owen Roberts is focusing on robotics as a way to help prepare students for working in the 21st Century.

His robotics initiative, which began this school year, is the cornerstone of his program in STEM (science, technology, engineering and math).

The district linked up with California-based VEX Robotics to offer robotics in fifth-grade classes and middle schools this fall. After-school robotics programs are already in some high schools.

The robotics program is an example of local businesses partnering with the schools – with Infinite Energy pledging $50,000 over five years for the program.

“Working on robotics helps kids think critically and work collaboratively in teams in developing products that solve a problem,” Roberts said. “They develop a mental framework that they can apply to jobs of the future – ranging from business to medicine.”
Keeping Programs Relevant

Letter from the President

Santa Fe College has a long history of tailoring educational offerings to the needs of the workforce, notes John McNeely, the college’s associate vice president for career and technical education.

The college recently began offering courses in insurance in response to demand from the industry, largely because of the decline in the workforce as baby boomers retire.

“The attitude is, ‘If you can show us where training ends in jobs, we can set up courses
for you,’” he added.

The job market is good locally, with many local insurance agencies as well as national, state and regional headquarters for Nationwide, Tower Hill and Farm Bureau insurance, Scarborough said.

“It’s great that more young people don’t have
to leave town to get good jobs,” he said.

The University of Florida is creating opportunities that can enable graduates to stay in Gainesville through the Innovation Academy, an undergraduate program that is now in its fourth year – with an enrollment of 1,000.

They helped student David Nassau expand Hopping 4 A Cure, a charity he founded that coordinates hopscotch tournaments to raise funds to fight multiple sclerosis, he said.

He had assistance from an eminent scholar – Michael Morris, the James Walter scholar chair in the Warrington College of Business Administration. “In his course, Dr. Morris challenged me to really think about my business plan for the future,” Nassau said.

Based on his plan, Nassau has expanded Hopping 4 A Cure, including establishing a chapter at Florida State University.

This semester, he’s an intern at Intel in Santa Clara, California. “Silicon Valley is cool, but I’m eager to come back to Gainesville.

“There’s not the sense of community in the Valley as there is in Gainesville,” he said. “Each city is in its own bubble.”

The Importance of Summer Camps & Activities for Children