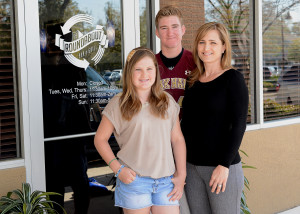 At The Roundabout Bar & Grill in Haile Publix Market Square, Greg and Cate Trunnell have decided to divide and conquer.

After moving into the former O!O Tapas and ‘Tinis site late last year, the Trunnells took what was already an attractive space and put their own signature on it. The most-notable new feature was a decorative wall splitting Roundabout down the middle, creating a restaurant side and a sports bar side.

Patrons enter into the proper restaurant side, which has tables and booths, or take a quick left turn and find themselves at a semi-circular, concrete bar surrounded by high-top tables and six TVs.

Unlike its predecessor, which appealed to an older clientele, Roundabout easily transitions from a restaurant that’s casual enough for families to an after-hours bar.

Cate, 39, and husband Greg, 42, saw the restaurant as a gathering place for friends and families in and around Haile Plantation. They designed it with their own children in mind. Chase is14, and Sage is 11.

The restaurant has brought a close family even closer. On any given afternoon, you can see the Trunnells hanging out at the grill, while Chase busses tables and Sage helps out.

Not that overhauling and opening a restaurant isn’t without its challenges. “It’s been a learning experience,” Greg says. “At first, you don’t realize what you should be doing.”

In all fairness, this is the Trunnells’ first crack at restaurant ownership. Greg is a general contractor and Cate owned a scrapbooking store. Greg put his expertise to good use while transforming the space, while Cate’s experience running a retail business has helped with day-to-day operations.

Cate grew up near Millhopper, then attended the University of Florida, where she met Greg.

Both share a deep appreciation for how much Gainesville revolves around families, which is why they opted for a more casual setting in Roundabout.

“We thought for this area, it’d be better to make it a family friendly place,” she explains.

The restaurant opened in early December, which led to long hours for Greg and Cate. But Christmas came early for the Trunnells, as locals seemed thirsty for a new hangout.

The Roundabout’s menu reflects its laid-back, fun attitude. Thanks to two new chefs with a combined 50 years of experience, items range from crab-stuffed jalapeño poppers to a buffalo chicken sub to roasted vegetable gnocchi. Cate’s favorite dish is the sea scallops with mushroom risotto.

Like its predecessor, the bar features a variety of martinis, but it also has a wide selection of beers on tap and an extensive wine list.

The Roundabout’s dual personality also shows up in its specials: $5 martinis on Thursdays; kids eat free on Wednesdays; and live music a few nights a week.

The Trunnells say purchasing the Roundabout Bar & Grill is one of the best decisions they’ve ever made.

“We wanted it to be a place where you could come with your kids after their game and feel comfortable,” Greg says. “On the other hand, we have retained the feel of O!O’s, so it’s the best of both worlds.”

12 HAPPening Apps for the Whole Family