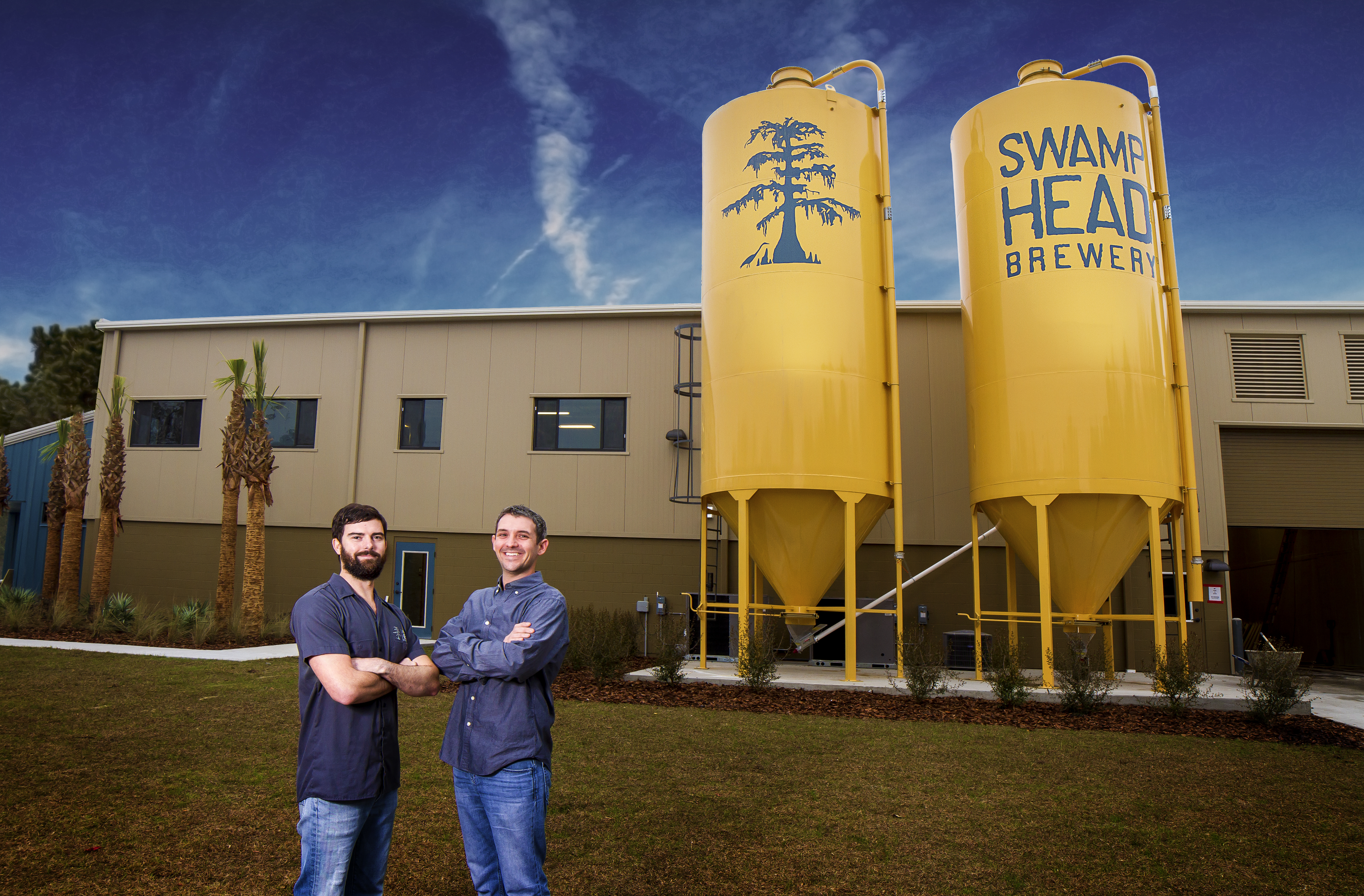 Swamp Head Brewery is all about an experience: customers enjoying high-quality beer and connecting with the company’s strong values.

Owner Luke Kemper said customers have responded well to that guiding philosophy, resulting in production rising from 200 barrels in 2010 — Swamp Head’s first year — to 6,500 barrels in 2014.

Swamp Head is keeping up with demand — and making room for future growth — by opening a new brewery.

The new location at 3650 SW 42nd Ave. in Gainesville expands Swamp Head’s space to 13,000 square feet while providing enough drainage and parking to grow to 60,000 square feet in the future.

Kemper wanted the site and the building to reflect Swamp Head’s sense of high quality and environmental stewardship.

With that in mind, the design includes a large, attractive pond that adjoins a conservation area.

Windows in “The Wetlands” tasting room provide customers with a great view.

“We wanted a focus on the outdoors and (to) demonstrate our commitment to sustainability,” Kemper said.

Behind the bar stands a 13-feet-tall piece of woodwork made from scraps of lumber from the Goodwin Co. in Micanopy. Goodwin’s sawmill produces wood for flooring and cabinets from logs that were previously submerged in Florida rivers for more than a century.

Loggers clear-cut much of the Florida landscape and floated the logs downriver during the time between the end of the Civil War and the early 20th century, said Carol Goodwin, who founded the company with her husband, George. Goodwin’s divers reclaim logs that sunk en route.

Although most of Swamp Head’s sales are in stores, providing a captivating experience at the brewery is important, said Marketing Manager Brandon Nappy.

“People can feel a connection to our brand, and ultimately craft beer, by taking tours of the building and talking with the brewers,” he said.

As part of its commitment to sustainability, Swamp Head is working with Solar Impact to become the first brewery in Florida with a portion of their operations powered by solar. Swamp Head is also committed to using Florida resources in its beers whenever possible – including honey, cane sugar and citrus, Nappy said.

Although Kemper knows the brewery business well, he knew he was over his head when he decided to build the new brewery.

“I had no idea what to do,” he said. “I had never built a building or built a house.”

Kemper put complete faith in Scherer Construction, hiring the company for the entire project — including design, construction of infrastructure and building the actual brewery.

“We’ve been growing fast, and we’re not heavily staffed,” he said. “We didn’t have time to learn about code requirements.”

Kemper felt reassured when he met with Scherer President Doug Wilcox and other members of the company’s team.

“Doug assured me that he would be there whenever issues arose,” Kemper said. “I got good vibes, and he has delivered on his promise.”

Scarborough Insurance has been another of Swamp Head’s business partners.

“I admire how Luke and his team have built the company on their own — all without outside investors,” said Principal Brian Scarborough.

Swamp Head is part of a trend toward higher quality food and drink around the country.

“People are paying more attention to what they eat and drink and where it comes from,” Nappy said. “Everyone loves drinking beer from their local brewery.”

Swamp Head brews five beers year-round and more than twenty others on a limited basis.

“Our beers can vary greatly in style, and some of them are really rare. It’s fun to see what you can have on tap,” Nappy said.

The new equipment at the new location provides better control over the brewing process while also tripling the brewery’s production capacity, Kemper said.

“We’re dedicated to brewing the best beer we possibly can and to being Florida’s brewery,” he said.