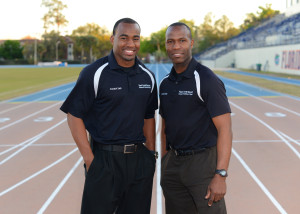 There are people in this town as passionate about their health and fitness as others are about the Florida Gators football team. Lucky for them, Gainesville is nowhere near lacking places to lift weights and run on treadmills. A relative newcomer to the local fitness scene, Next Level Sports & Fitness, LCC has quickly established itself as a prime option for individuals of all fitness levels looking to achieve their personal health goals.

Zephrin Augustine, the CEO and founder of Next Level, said his training facility is designed for those “who have a dream, and need that extra motivation to accomplish it—whether that is fitness or otherwise.”

Launched in 2010, the company’s ‘Dream it, Position it, Get it’ motto has proved to be a winning formula in inspiring fitness buffs and beginners alike to tackle their fitness objectives with the Next Level team.

“When people have a dream, they must position themselves properly so they can get the desired results,” Augustine said. “That is what we assist our clients in doing physically, mentally and spiritually.”

A former walk-on football player at the University of Florida, Augustine said he and his team of trainers and support staff spent much of 2012 fine-tuning their popular Sports and Fitness Boot Camp programs. As for 2013, the main objective has been to expand into new programs designed specifically for 7- to 13-year-olds. This endeavor is part of a more comprehensive plan to work with high school-aged individuals on their training and fitness ambitions.

“I have a passion to work with the high school age group, but in order to build longevity it will require us to work with the younger ages this year and perfect that and build upon it like we did with the boot camps,” Augustine said.

He added, “Once they have seen the value in training at Next Level, they will value it later and continue to train for their next level of success in athletics.”

One of two final nominees in 2012 for Best Minority Business in the Gainesville Chamber of Commerce’s Business of the Year awards, Next Level has positioned itself apart from trendy, big-box fitness centers with a more customized approach in assisting their clients’ fitness needs.

Augustine said Next Level’s accomplishments are due in large part to the four highly skilled trainers, or ‘coaching staff’, as he refers to them.

“We have the most inspirational and motivational coaches,” Augustine said, “who not only help our clients change their bodies, but we also impact their life by helping them to find the courage to achieve their dreams.”

Utilizing a variety of social media platforms and good old-fashioned word of mouth, Next Level has steadily increased its client base, but Augustine is careful not to scale his business too quickly. As Next Level gains more attention, he remains deliberate on when to add new services and programs. In time, Augustine may explore the possibility of expanding into other cities.

“It has been a slow and steady climb for us,” Augustine said. “I like to say, ‘better is the end of things than the
beginning.’”