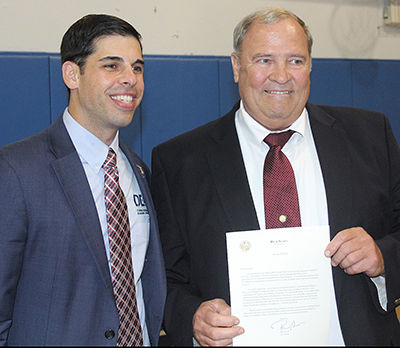 Top 100 Things to do in Alachua County

Newberry is growing economically with the help of snakes, batteries, sports and historic charm.

That was the message that city officials, business leaders and state officials delivered Wednesday (Oct. 22) in a celebration at the Easton Newberry Sports Complex.

The event marked the completion of a year-long pilot project of the Competitive Florida Partnership program and the launch of the second year of the program. Through the partnership, the Florida Department of Economic Opportunity assists communities in economic development.

“This is a very energetic community,” said Bill Killingsworth, director of the Division of Community Development. “Its quality of life is an important part of what makes it competitive.”

A business-friendly attitude also helped, said Bill Brant, the founder of Gourmet Rodent, a company that runs an indoor reptile farm employing 83 people in warehouse buildings less than a mile from downtown.

As the company, founded in 1986, grew at its former site off Williston Road, Alachua County officials clamped down on it – following a single complaint, Brant said.

They set the requirement that the company obtain a special use permit, with the condition that it cut its number of employees (then 70) to 25 and operate on only five of the 15 acres at its site.

Brant turned to Newberry. “What we saw there was open-mindedness,” he said.

Brant has sold company to Mike and Betsy Layman, who were unable to attend the event. The company is growing steadily in meeting the strong market for pet snakes and other reptiles.

The event also celebrated the success of Inspired Energy, which manufactures high tech batteries that have electronic chips that monitor their use and perform other functions.

The batteries power small electronic devices. About 30 percent of used in health care, 30 percent by the military and 30 percent in industry. The final 10 percent in other uses, including powering the lights in the costumes of performers in Cirque du Soleil.

The company formerly operated at the former battery plant located in unincorporated Alachua County outside the City of Alachua.

When it sought county approval for a new building, county officials balked. “They said, ‘It’s going to be dirty. Wouldn’t you rather be a lawyer,’” said Dave Baggaley, the sales and marketing director.

Inspired Energy talked with Newberry officials, assuring them that it uses battery cells that are manufactured elsewhere and assembles them into its battery packs, minimizing any chemical risk.

“It’s been great to work with a city that is fully onboard,” Baggaley said.

Now the company is building a second factory next to its current one in the Newberry Commercial Park, and it expects to double its workforce of 75 over the next 10 years.

The roles of sports in the Newberry economy include operating the archery complex, which an Olympic training site, in cooperation with the Easton Foundation.

After a slow start, Champions Park is coming into its own. It will host both the state tournament and the World Series for most age groups for the Babe Ruth softball this summer, Newberry Parks and Recreation Director Brad Carmen said. The City of Alachua will continue to host the World Series for 12-year-olds.

While Newberry grows economically, it is dedicated to preserving its charm, which its historic downtown represents, said Dr. Jerry O’Neil, chairman of the city’s Economic Development Steering Committee.

“We’re enhancing the future by embracing the past,” he said.

Top 100 Things to do in Alachua County