The Secret World of Habits

Throughout his career, Democrat Rod Smith has focused on problem-solving without regard for political party.

Dennis Jones is a veteran Republican lawmaker, having served 32 years in the Florida Legislature – yet he’s supporting Democrat Rod Smith’s bid for the state senate.

Jones commends Smith with working with him in a bygone era in which bipartisan legislative collaboration was common. “I’d love to see Rod use his experience to help bring back what we used to see as normal,” Jones said.

He commended Smith for championing bipartisan legislation on numerous issues – including laws protecting children from abuse and ones protecting patients’ rights in medical practice cases. “Rod has helped a lot of people who are not as fortunate as most of us,” Jones said.

Smith’s experience as a state senator from 2001 through 2006 is valuable, Jones said. “Rod won’t need a couple of years of on-the-job training,” he said. 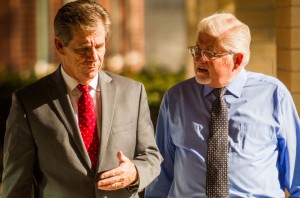 “I’ve always seen him as a game-changer, someone who is always seeking new ways to solve human problems,” she said.

Zegel recently met with Smith and Alan Abramowitz, executive director of the Statewide Guardian ad Litem program. “I could see him get excited about helping children,” she said. “That’s what he thrives on.”

Throughout his career Smith has focused on problem-solving without regard for political party. “You can’t deny the needs of abused and neglected kids, whether you’re Republican or Democrat,” Zegel said.

As a member of the Florida Juvenile Justice Advisory Board, Smith sparked the creation of the PACE Center for Girls, Zegel noted. He also was one of the few state attorneys to place money derived from deferred prosecutions and similar sources into community resources, such as PACE, Peaceful Paths Domestic Abuse Center and the Child Advocacy Center, which Smith’s wife DeeDee established. “He believes in a broad approach to solving problems,” Zegel said.

Ester Tibbs, the longtime district administrator for the Florida Department of Children and Families, repeatedly worked with Smith. “I always knew there would be good results for child victims of abuse,” she said. “His energy, compassion, knowledge and commitment to finding solutions to the complex issues involved in these cases benefited the community.”

Smith led improvements to the Child Welfare Legal Services, Tibbs said. “He was an ally in all efforts to help the most vulnerable young people in our community,” she said.

Spencer Mann, who was Smith’s longtime chief investigator in the state attorney’s office, credited Smith with creating Operation Payback, a program that allowed first-time offenders to get a job and repay their victims.

“He was a trail-blazer with this, and other state attorneys [used his example to] set up their versions of Operation Payback,” Mann said. “It helped many people who were on the wrong track to get back on the right track.”

Mann also said that Smith would bring his usual tireless energy if he was returned to the Senate. “He was always the first one in the office in the morning and the last one to leave at night,” Mann said. “He would work all night in the days just before a major trial.”

Smith points with pride to the numerous plaques on the wall of his office. The plaques represent honors from groups that often are at odds with one another on legislative issues – such as the defense attorneys and the prosecutors.

“This shows my success in not looking at issues as black and white,” Smith said. “For most issues, you have to find the gray and reach a compromise.”

Smith displayed his ability to find middle ground in developing a bill that prohibited the state from executing prisoners who were deemed mentally retarded.

“Given his track record as a prosecutor and a death penalty advocate, Smith was able to write a bill that drew the support of the state prosecutors, the sheriffs and other law enforcement groups that had previously opposed the effort,” the Sarasota Herald-Tribune reported.

When he was in the Legislature, Smith sought out reasonable colleagues. “I identified the guys from both sides that were taking a serious approach,” he said.

Smith worked with both Republican and Democrats on legislation protecting the privacy rights of families of deceased accident and crime victims. That legislation, passed in 2001, was prompted by the media’s attempts to obtain accident and autopsy photos following NASCAR driver Dale Earnhardt’s fatal crash.

Smith was passionate about the legislation because, as state attorney, he had successfully fought to withhold photos of the five victims in the 1990 Gainesville student murders.

Jon Mills, a former speaker of the Florida House and former UF law school dean, served as special counsel for Smith in the student murders privacy case. “In the student murder case and the Earnhardt legislation, Rod defended the principle of protecting families from the harm and horror of publishing photos that should be kept private,” Mills said.

“He showed compassion toward all families in similar circumstances,” Mills added.

“There are things that people expect to keep private,” Smith said. “I’m proud of working with a team to protect the heirs of the deceased.”

Smith is not content with his past accomplishments and hopes to do even more in the future. “Florida faces many challenges, and I want to make a difference,” he said.

Photography by: Allison Durham and Courtesy of Rod Smith

The Secret World of Habits