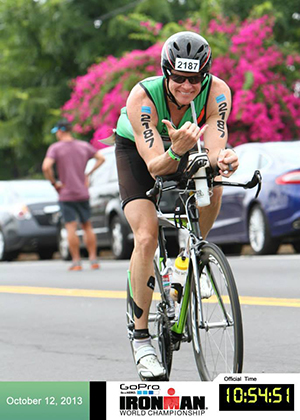 Embrace the Suck: It’s no accident or fluke that Rich Blaser is at the top of his game, both professionally and physically. He’s a man who thrives on setting the bar high, puts himself on the spot by sharing his outrageous goals with everybody and embraces the suck while he’s working to accomplish them. Embrace the suck, you ask? Yep. You read that right. In fact, he actually wears a rubber bracelet that says, “Embrace the Suck.”  See, this is the difference between Rich and most folks stuck somewhere in the middle. He’s not afraid of monstrous challenges or the incredible work it takes to meet them. He’s also not afraid of being held accountable. In fact, that’s what drives him. He purposely seeks out seemingly impossible tasks, and midway through, when the experience feels the worst…he takes a deep breath and, realizing how incredible it is to work towards greatness, embraces the suck. Are you willing to go public with your next big challenge? For certain, doing so would increase the likelihood that you, too, might grow more successful than you thought you could.

BHAG Goals: Rich has grown his business by setting the type of goals that require relentless work hours, discipline, ingenuity and perseverance. He became an IRONMAN triathlete by doing the same. Referencing Jim Collins’ book “From Good to Great: Why Some Companies Make the Leap … And Others Don’t”, Rich likes to set BHAG goals. These Big Hairy Audacious Goals are what he thrives on. Why would someone who had never so much as run a 5K decide to sign up for an entire IRONMAN triathlon? Well, he was setting a BHAG goal for his business and thought it would be a great time to do something incredible physically as well. Plus, as he says, he was 40 and not getting any younger. Are you setting big enough goals for your business and body?

Prioritizing Employees: While visiting with Rich at Infinite Energy, I had the chance to explore his very well-equipped fitness facility, which all of his employees and their spouses have 24-hour access to, free of charge. He also introduced me to several employees who have lost significant amounts of weight or made new strides in fitness because their boss was such an inspiration. Wouldn’t you like to be, or have, that type of boss? Rich also has a full-time wellness coordinator on staff. Why does he do all this? He knows that fitter employees are happier, more effective, more energetic and cost less to the company — something all employers should consider.

Balance: Juggling work and the extreme amounts of training that go into endurance sports can be a bear. Throw in a family, and you can become a circus bear trying to juggle. However, Rich knows that he can’t have it all if he’s not willing to creatively make time for it all. Waking up at the crack of dawn on weekends to get his workouts in before the kids wake up is hard, but the fact that his children never have to miss him matters most. Plus, his healthy lifestyle increases the likeliness that he’ll be healthy enough to watch his children grow old. Make sure you’re putting enough energy into your work, health and family, because, believe it or not, you can have it all!

Be Inspirational: Rich Blaser is hired! Okay, I know he’s not looking for a job in fitness, but if he were, I’d hire him in a heartbeat. Rich wants good things for his friends, family and employees so badly that he’s willing to do preposterous things just to show others that in life, anything is attainable. A large banner hangs on a wall signed by hundreds of employees to recognize Rich’s efforts at the IRONMAN World Championships in Kona, Hawaii. Most of the signatures came with sweet messages telling him how inspired they were to do better and be better because of Rich’s hard work. Do you have that effect on people in any avenue? If not… step it up! We could all use a little extra push, and it helps when others who strive for excellence surround us.

I think we can all agree that there is something special that separates top executives from most in the private sector. They have an insatiable hunger to conquer their goals and accomplish what most are afraid of even trying. Rich is that guy. If you sat down with him and asked him how to achieve greatness, he’d tell you to: