The Epilepsy Foundation of Florida serves the majority of the 400,000 Floridians who suffer from the condition

The brain is your most powerful organ. On a daily basis, an estimated 85 billion neurons must complete upwards of 5 trillion chemical reactions each second. Without these chemical reactions, you would not be able to lead your everyday life. You would lose control. Imagine a life with little to no control. Your brain, the one thing you have always viewed as yours and only yours, now has “a mind of its own.” Unexpected and unexplained electrical activity plagues the brain. Sometimes this reaction results in a blank stare, and you lose awareness. On occasion, this results in uncontrollable muscle spasms. At other times, all your muscles tense up, you lose consciousness, sometimes control of your bladder, and then convulse. Either way, you are having a seizure. There are medications that may help, but nothing is guaranteed. Will you convulse today and suffer a head injury that disables you? Will you seize in the night and not wake up? This is what it’s like to live with epilepsy.

When Mark and Marjorie Buchbinder first learned their daughter had epilepsy, they were ill-informed about the disease. As they searched for support and knowledge, they realized the lack of epilepsy awareness, seizure recognition and first aid education that exists in our society.

In 1971, in their South Florida home, they partnered with others affected by epilepsy and established the Epilepsy Foundation of Florida. The foundation began as a much needed support group, a safe haven for like-minded individuals to gather and share, but it expanded from there.

Today the foundation leads the fight to overcome the challenges of living with epilepsy, accelerate therapies to stop seizures, find cures and save lives. EFOF is the principal agency for epilepsy programs and services sponsored by the state of Florida, serving the majority of the 400,000 Floridians who suffer from the condition. EFOF provides everything from support groups and education to individualized case management and psychological services. EFOF also acts as an advocate and educator for epilepsy awareness.

EFOF leads a fight that, at this point, has no foreseen end. Currently, epilepsy is an incurable neurological disease. There are over 20 types of epilepsy syndromes with more than 40 types of seizures. That’s why every person with epilepsy has a different story and a different prescription. With over 26 anticonvulsants that are currently on the market, it is hard to know which medication will work best. After a person is diagnosed, they immediately begin a trial and error period with medications. For some, this period ends quickly.  Others may spend their whole lives in a trial and error period, and about 25 percent of those will not find a medication to eliminate their seizures. Most anticonvulsants are costly, ranging anywhere from hundreds to thousands of dollars for a one month supply. The cost of battling epilepsy only goes up from there. Add in bills for neurologists, epileptologists, blood tests, echoencephalographs (EEGs), magnetic resonance imaging scans (MRI), computerized tomography scans (CT), sleep studies and psychotherapists. Fighting epilepsy is financially taxing and unaffordable for most families. But, the foundation can help. We not only help our clients to find neurologists but also find the best form of financial support.

At the foundation, we understand that battling epilepsy means so much more than what is seen by the naked eye. Some of our staff and volunteers, including myself, know this experience firsthand.

Those with epilepsy aren’t only dealing with financial issues, they frequently deal with depression and stress as well. Approximately 75 percent of Americans admit to high levels of stress on a daily basis, and 72 percent associate their stress with money. Stress is common in our society, but stress does not have the same effect on the average American as it does on someone with epilepsy. For most people affected by epilepsy, stress is a trigger — which is any key factor that is known to precipitate a seizure.  Even when controlled by medication, triggers can cause a “breakthrough” seizure to occur. Clients who participate in our alternative therapy programs, such as art therapy and yoga therapy, experience decreased stress levels, which can also decrease seizure activity. Our support groups have a similar effect, in addition to offering a sense of belonging.

We take great pride in the local programs that we provide to our clients, because we witness the benefits and appreciation of our clients directly. Through these programs they are able to find outlets for stress and loneliness by companionship with others who relate to their struggles. Our local fundraising efforts directly support our local programming. We are proud to inform our supporters that 87 percent of all donations return directly to our programs.  Without our supporters, we are no support system.

This year, the foundation celebrates its 45th anniversary. Although it has grown a considerably over the years, we recognize that there is much more work to be done. There still exists a woeful lack of epilepsy awareness; so many people don’t even know we have a foundation to serve the epilepsy community. In order to maximize service to those in need, we need to consistently be in the public eye.

To that end, EFOF has begun increasing its awareness activities and fundraising events. We have always had two annual events, a formal dinner and the Walk the Talk. This year, EFOF had a full calendar of fall events, which kicked off on October 19th with a social at The Wooly, Let’s Talk About It: 45 Years Strong. The event featured live jazz, food by Backstreet Blues Catering and a silent auction with fabulous items from local businesses. The event drew over 60 supporters and political leaders, such as Keith Perry and Jess Irby. It was an evening of entertainment, all for a great cause. We accomplished what we had strived for — to raise awareness about the foundation and epilepsy as a whole. But this cocktail mixer was just the start as we rolled into November, the national month devoted to epilepsy awareness. 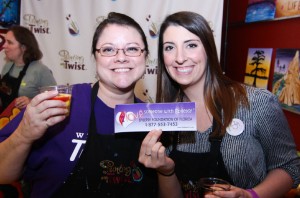 left to right: Mandy Hancock and Julianne Raymond at Painting with a Twist.

Throughout November, the foundation could be seen at local events, including fall festivals and health fairs. We also hosted “spirit days” at restaurants such as Buffalo Wild Wings and BJ’s Restaurant & Brewhouse. We even worked with community partners to host Painting with a Purpose and the 2nd Annual Tailgators for Epilepsy Awareness. November may have been our biggest awareness month, but once again it was just the beginning. There are plenty of events to come and plenty of opportunities for the community to participate.  Looking forward to spring, the Epilepsy Foundation of Florida will be hosting the annual Walk the Talk, our first Seize Your Day 5k and Purple Pint Day for Worldwide Purple Day. We hope that you will join us in our awareness activities and show support to those battling epilepsy.

Unfortunately, there is still a stigma associated with epilepsy and seizures. Those that have epilepsy are embarrassed to share their stories. They should not be. That is where the Gainesville community has the opportunity to step up and show support for the epileptic community. Let them know you have their back in this battle.

Achieving a Love of Learning