A Network Of Leadership

For the past several decades, Gainesville has been largely defined by the University of Florida. A college with 50,000 students has the potential to swallow the character and identity of a relatively small city in North Central Florida.

However, with the advent of Innovation Square in the area between UF and downtown Gainesville, the city has taken on a new title as an emerging market for technological growth and business startups. The commercial real estate and customized, modem offices in and around Innovation Square are tailor-made to the tastes of the millennial generation. Due to the location, Innovation Square tends to attract tech companies looking for engineers and developers from the top-ranked pool of UF graduates.

This millennial-friendly culture, accompanied by the presence of startup incubators like Florida Innovation Hub and Starter Space, has created the perfect environment for growing companies to position their headquarters.

Feathr, an event marketing software company catering to the needs of event organizers, is one of the newest tenants.

Aidan Augustin and his co-founder, Aleksander Levental, attended UF during their college years. After they decided to launch Feathr, they formulated their business plan and launched their company from within the Florida Innovation Hub in Innovation Square.

“We were one of the first companies to move into the Florida Innovation Hub,” Levental explained.

There, the company flourished. The leadership at the hub provided a strong ecosystem where Feathr could garner advice and expertise that would otherwise have been difficult to receive at such an early stage. While growing in the Innovation Hub, Feathr created a strong network with other startups located within the building as well as with other companies in and around the Innovation Square area.

They eventually moved Feathr to Austin, Texas, after winning a pitching competition at SXSW, an emerging technology festival. While in Austin, they continued to develop their event marketing cloud, but the co-founders found the city to be a less advantageous location for Feathr than Gainesville.

Though Austin is often recognized as a premier hub for startups, there are a lot of companies competing for hires, which drives up the cost of hiring. Networking and recruitment were also challenging since the startup community in Austin was physically spread out over a large area. In addition, Augustin and Levental found that the University of Texas at Austin had fewer programs than UF to help local companies recruit upcoming graduates.

In Austin, the leaders of Feathr missed the connections that they had previously made in Orlando and Gainesville. Although there were enough startups to have a solid network, the competition for talent was intense. Not only were they fighting for employees with major companies like Microsoft and Facebook, but also they were unwilling to participate in the “pageant show” that was necessary to attract the right talent. Instead, while in Austin, they focused on getting larger clients and growing their business.

As Feathr grew to the point where hiring was necessary, Augustin and Levental decided that it was the right time for a big, strategic move. When looking at large Florida cities like Orlando, Tampa and Miami, the distance between each startup community was frustratingly large. With a 45-minute drive from one side of the city to the other, the ability to network would have been severely limited.

As they considered their options, the unique culture of Innovation Square in Gainesville was attractive. In terms of recruiting talent, the ability to walk to UF was priceless. In Gainesville, they could build a solid reputation as well as a brand that was recognizable and outstanding when recruiting top graduating talent. In their experience, and when speaking with co-founders of other startups, they found the competition for hiring new talent within the city of Gainesville to be less fierce than in larger cities because it was just beginning to transition from a college town into something greater. Plus, with a lower cost of living than many of the larger tech cities, the team felt that they could build a much better long-term lifestyle in Gainesville. It was a win for both Feathr and its team.

Levental said, “In Gainesville, because the startup and entrepreneurial activity is certainly a larger part of the economic pie, it’s a much larger part of the city’s personality pie. It’s definitely a thing that people talk about — tech companies and startup companies in Gainesville — and it gets paid a lot of attention. It’s easy to feel like Gainesville is a startup-y city, and it’s easier to stand out.”

After weighing their options, the co-founders decided to make the strategic move to relocate their business back to Gainesville. They transferred back into the Florida Innovation Hub, where they remained until this past May. During their time in the Hub, they expanded from 2 to 14 employees. They quickly outgrew their office space, but knew that they wanted to remain near Innovation Square to take advantage of the strong network of local startups.

“The fact is that there’s only one viable place to be a cool startup in Gainesville, and it’s this two-by-two block corridor between UF and downtown,” Augustin said. “It’s where Paracosm is, SharpSpring is, we are, Mobiquity is and where Mindtree is. It’s a lot easier to be in a community and to know the people, to talk to each other and schedule events.”

After determining that they wanted to remain near Innovation Square, Augustin and Levental decided to move into one of Trimark Properties’ private office buildings. They chose to lease the 102 office at Innovation Square, located just steps from the Florida Innovation Hub, based on the clean design, stained concrete floors, natural light, exposed ductwork and the customizations that Trimark was able to provide. After discussing Feathr’s specific needs, Trimark added internal walls and design elements to the space. Now, at completion, the office space includes three private offices, a large open work area, a conference room and two small “phone booth”-style offices for meetings or calls. 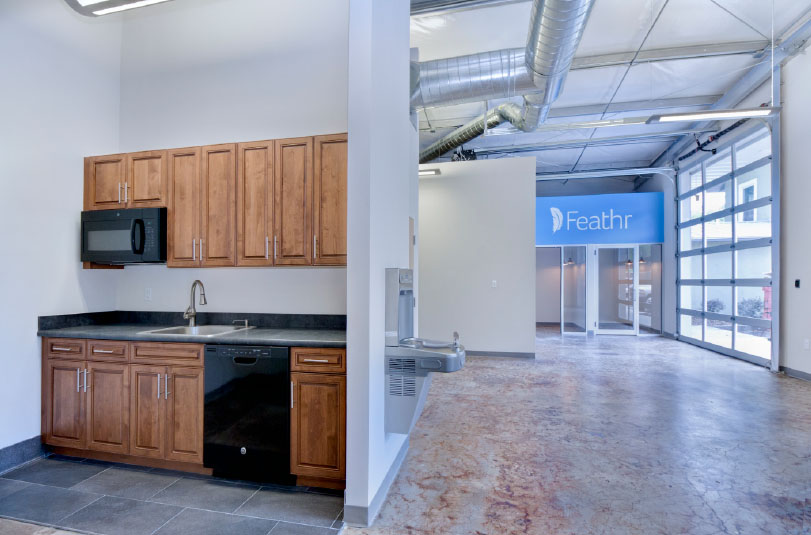 Both co-founders believe that Feathr’s new location in a custom-built office space in the heart of the growing Gainesville tech scene will provide the best opportunity for the business to further develop its products and broaden its reach of clients.

As Gainesville begins to take on an identity as a hub for startups and even major tech corporations like SharpSpring and Mindtree, the draw to the city is increasingly great. Feathr, like other tech companies making Innovation Square home, serves as a possible example for the future business culture of the city as a whole.

KAITLYN MCKINLEY is a communications professional living in Gainesville, Florida. She is passionate about the real estate business, finance and marketing luxury brands.

A Network Of Leadership