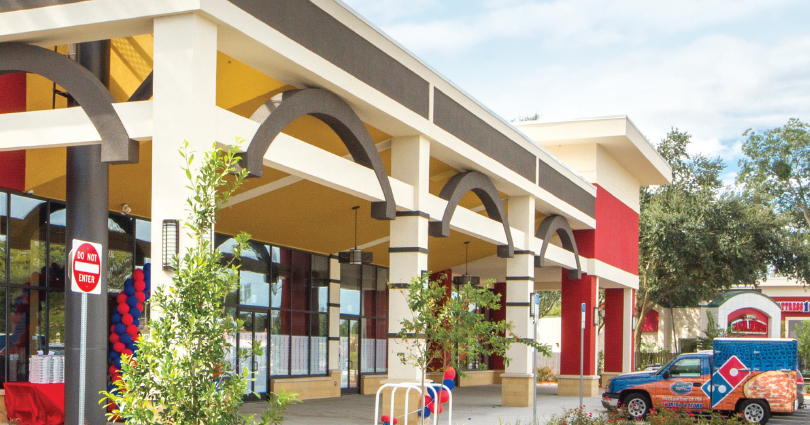 There’s a new restaurant in town, and it’s the first of its kind in the country.

Located on Archer Road, or “Restaurant Row” as it’s known in the quick service restaurant (QSR) world, the new Gator Domino’s restaurant is the first Domino’s in the U.S. to use an all-digital ordering platform. Customers can place their delivery, carry out, dine-in and even drive-thru (dubbed the “app-thru”) orders using their smart phones.

The new digital platform is the brainchild of local Domino’s franchisee Freddie Wehbe and his Domino’s World Headquarters partners in Ann Arbor, Michigan.

Wehbe’s innovative nature has gained him influence within the company over time. He decided to go all-digital after focus groups said they disliked long waits at the drive-thru, which was not surprising to Wehbe. But what did surprise him, he said, were comments that customers did not like ordering through the intercom system and would prefer to pay using their smart phones.

“In short, they wanted more automation and less interaction,” says Wehbe. “Now, people who have pre-ordered on their smart phones can pick up their food without any drive-thru hassle.”

For customers who haven’t pre-ordered, there is a “digital app waiting area” where they can quickly pull in, order with the Domino’s app, Twitter or by text message, and track their food on 70-inch-screen televisions.

Since reinventing their pizza in 2009, Wehbe said, Domino’s has seen market share grow exponentially. A total revamping of ingredients, accompanied by an elaborate national ad campaign and several new products helped launch the chain into the QSR stratosphere.

“For QSR’s to succeed in the very crowded restaurant space, operators must not only keep their offerings fresh and innovative,” Wehbe said, “They must also find innovative ways for customers to engage with their system.”

Responsiveness to Customers
In addition to consulting with his corporate peers and IT team, Wehbe involved more than 350 people in focus groups in planning the new restaurant.

“They told us they wanted to see the people making their food,” he said. “Our open kitchen lets customers watch their food being prepared. We even added ‘kid’ stairs so youngsters can see, too.”

The restaurant includes ten large televisions to watch sports — with the displays located conveniently that they are visible to everyone — also in response to the focus groups.

“We’re a sports bar without the alcohol,” Wehbe said.

College students said they had nowhere to go after most establishments close, so the new Domino’s lobby and patio — not just the drive-thru — are open until 4 a.m. daily.

Moms said they wanted a budget-and-kid friendly venue for birthday parties, so Wehbe added a private party room with a chalk wall for kids to draw on.

Other key feedback that Wehbe implemented include adding USB charging stations at every seat in the restaurant and free, fast WiFi.

The restaurant also embraces the locals’ love of the Florida Gators. The store is Gator-themed and loaded with Gator imagery, including a custom-made “Gator Blue”-skinned pizza oven, another first for the company.

“I’m obviously a huge Gator fan,” Wehbe said with a laugh. “Make no mistake—this restaurant is in Gator Country and proud of it.”

Continuous Improvement Leads to Excellence
In 1988, Wehbe started working as a Domino’s driver while attending the Florida Institute of Technology in Melbourne. Three years later, after graduating with a degree in engineering, he became a store manager in Merritt Island, where he doubled sales in a year.

In 1995, Wehbe became manager of Domino’s Store 5150, located at 2106 SW 13th St. in Gainesville. Within a year, he nearly tripled sales. By 1997, Store 5150’s sales were 10 times above what they had been when he started, which helped Wehbe win his first of three U.S. Manager of the Year Awards. Two years later, the unit was the busiest conventional Domino’s store in the United States.

Gator Domino’s now has 11 stores employing 220 people, including a store in the city of Alachua and one in Starke.

The franchise is also the pizza provider for University of Florida sports, with units in Ben Hill Griffin Stadium, the O’Connell Center and McKethan Stadium.

Building a Culture of Success
Wehbe has been planning for success over the years by reading one to two motivational or business books a month.

“If you study successful people, you find out that they have a game plan,” he said. “Every single day, I look back on every move I made and figure out whether I did my best and where I can improve.”

Wehbe said he works especially hard at respecting and motivating his team.

“Some need coaching, some need motivation, some need help overcoming poor work habits,” Wehbe said. “It’s my duty as a leader to learn what’s important to them and to help them succeed, because that helps our community as a whole succeed.”

Wehbe compares his team-building to the approach of successful Gator football coaches.

“When Urban Meyer and Jim McElwain came in, they had most of the same players that their predecessors had, but they had a different mindset,” he said. “They were able to get better results with the very same players, and to me that is the definition of leadership.”

Domino’s offers opportunities for advancement, and 90 percent of its franchise owners started as drivers and pizza makers, Wehbe said. Any ambitious member of the community can join the management team, work hard and apply for store ownership after one year of successfully managing a store.

“The sky is the limit as long as you have a great attitude and are willing to work hard and learn,” said Wehbe.

Wehbe uses his hard-earned business knowledge to not only to uplift local community members, but also Domino’s operators around the world. Operators often tour Wehbe’s facilities to watch him work and ask questions. He also travels to speak at meetings and national conventions.

Wehbe’s success recently attracted Geo Crume, who has worked in the pizza business for 17 years, to join the Gator Domino’s management and leadership team.

“I wanted to learn from Freddie,” Crume said. “I’m continuously impressed by how he pays attention to people and gives them recognition.”

Crume is also impressed by Wehbe’s attention to detail. “We go a step beyond to make our stores comfortable and safe — even thoroughly cleaning closets that no one ever sees,” he said.

The esprit de corps among staff has a payoff, Crume said. “Employees are our best ambassadors,” he explained. “When they tell their friends good things about the company, it’s great word-ofmouth advertising.”

Giving and Giving
While Wehbe is high tech, he’s also high touch. That’s evident in his design of a community room in the restaurant, which local nonprofits can use for board meetings.

He also personally runs pizza stands at dozens of community events throughout the year. When Domino’s serves pizzas at fundraisers, Wehbe donates the proceeds to the charity. His commitment to giving back in the community has led to incredible loyalty and support from the community, helping Gator Domino’s become one of the premier Domino’s franchises in America.

That innovative approach has created the opportunity for Wehbe to test out new ideas in Greater Gainesville first.

Gary Kirkland, the spokesman for LifeSouth Community Blood Centers, is one of the many people in the community who notice Wehbe’s efforts.

“He shows up at 5 o’clock or 6 o’clock a.m. for the 5 Points of Life Marathon, putting up tents,” said Kirkland, “He does whatever it takes to help.”

“Freddie has lots of marketing savvy,” continued Kirkland. “If he sees a location that might be good for a blood drive, he lets us know about it. He also puts stickers promoting blood drives on pizza boxes.”

Wehbe supports many local groups in a leadership role, such as serving on boards for Gateway Bank of Central Florida, the Sebastian Ferrero Foundation and Keep Alachua County Beautiful. He is also a Leadership Council member at the Children’s Miracle Network at Shands Hospital. Wehbe and his wife, Daurine, were the 2015 chairs for Gainesville’s March of Dimes Walk.

Their generosity has touched her personally, said Tammy Dygert, executive director of March of Dimes of North Central Florida.

After Dygert’s daughter, Autumn, was born three months prematurely in 2008, Wehbe provided free lunches for her and other parents who were staying with their newborns at UF Health Shands Hospital.

“He started doing this once, and it grew to something he does all the time,” Dygert said. “He’s thinking all the time and responding when needs arise in the community.”

Wehbe is also involved with Tyler’s Hope, the Fisher House, UF’s Dance Marathon, the Cystic Fibrosis Foundation and St. Jude Children’s Hospital. He won an Impact Award in 2014 from Business in the Heart of Florida, received the Gainesville Police Department Partner Award in 2015; the Purpose 20 Award from UF’s Center for Leadership and Service in 2015; a Charlie Award from the Florida Magazine Association in 2014; the Business of the Year award from the Gainesville Area Chamber of Commerce in 2009, 2007 and 2006; and the UF Entrepreneur of the Year award in 2010.

“The community will support businesses that support the community,” Wehbe explained. “Plus, it’s the right thing to do. This is my community and I’ll do whatever I can do make it a better place.”