Business, Sports and Recreation, Things To Do 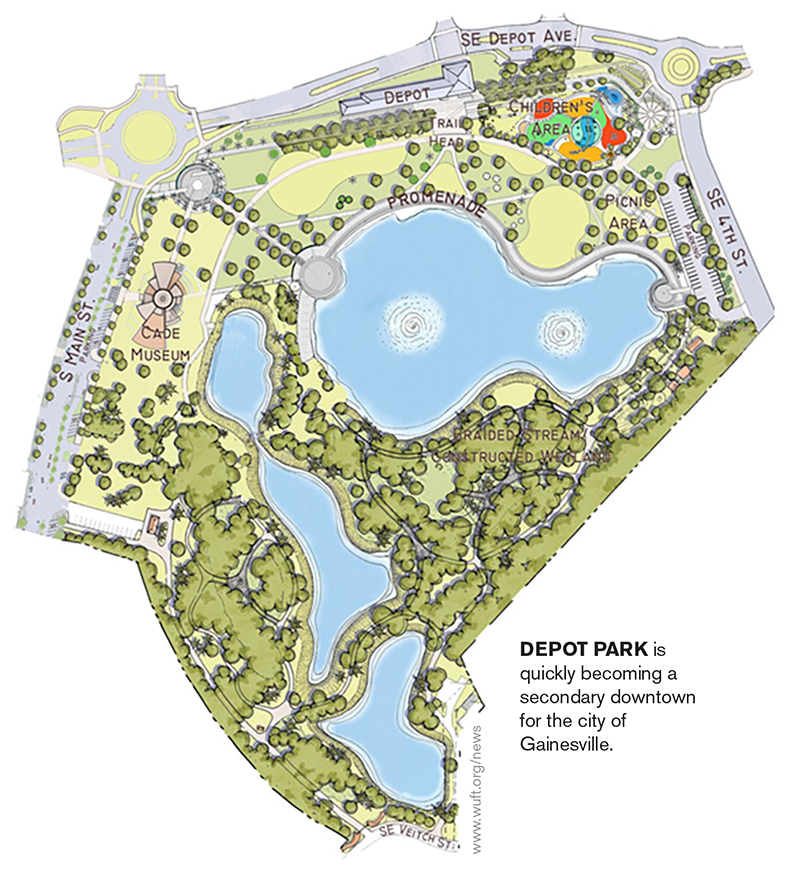 Five brightly colored flags mark the entrance of Continental Imports at 1219 South Main Street. A Gainesville staple for 37 years, the independent European car repair shop has seen a lot of changes over the years — much of it in its own backyard.

“We are very pleased with the growth we’re seeing down here,” said Darren Jones, co-owner of Continental Imports. “To me, South Main Street is one of the gateways to downtown. It seems that this will be a secondary downtown in the coming years.”

His enthusiasm is echoed by a wave of public and private sector investments that have flooded the area in recent years.

Headquartered south of downtown, the City of Gainesville’s Regional Transit System (RTS) currently manages a fleet of about 123 buses and employs a workforce of nearly 300. Last fall, the federally funded $39.8-million Corrine Brown Transit Facility opened its doors, allowing RTS to grow to a fleet of 200 buses and a workforce of 450-plus personnel in coming decades

Craft beer enthusiasts and food trucks have flocked to First Magnitude Brewing Company, which is now producing a canned beer product after taking local taps by storm. The Cade Museum added a 3D-printing lab to its current site and is on track to construct its creativity and invention museum at Depot Park in 2016. The historic Cotton Club recently earned a nearly $500,000 state grant to complete restoration of its cultural music hall near the Power District in southeast Gainesville.

By the time this article is published, the Gainesville Community Redevelopment Agency (CRA) will have broken ground on the next phase of the integral 32-acre Depot Park project: constructing an active waterfront promenade, football-fieldsized children’s play area and splash pad, picnic pavilions, gardens and more attractions that will draw visitors from across North Central Florida. The hefty industries that have fueled South Main Street’s economic engine for decades — commercial operations like truss manufacturer Ridgway Roof Truss Company, cement and concrete producer Argos and electrical supply distributor Graybar — are being augmented by a plethora of new enterprises betting on the area’s increased profile.

Laura Tanner is one such pioneer. Her décor company 8LP Design specializes in breathing fresh life into conventional spaces through Annie Sloan chalk paint, custom lighting and vintage furniture. Given the revitalization nature of her business, it was perhaps fitting for her to take a risk and move her whimsical retail outlet to South Main Street last year.

“We were aware of the brewery, park and museum…the area looked like an up-and-coming part of town,” she said. “We’re a little off the beaten path, but everything seems to be livening up.”

In October, Liquid Creative Studio’s Vice President of Operations Scott Schroeder will move his three businesses (which employ 14 professionals) to the area. He doesn’t plan on having a traditional workspace — Schroeder is joining forces with the Gainesville Fine Arts Association to open an art gallery with open workspaces for artists to work and exchange ideas in the same building.

“We feel confident and comfortable moving into the region, knowing that it’s going to pick up in a few short years,” Schroeder said. “We see the CRA and community’s vision for the area and want to contribute to the region’s creative district.”

Across the street, the Doris Bardon Community Cultural Center bought and began renovations on the old Backstage Lounge property. New additions include a marquee wooden dance floor, gift shop and grand piano. When the Arts Association of Alachua County opens the Doris Center in fall, the place will be aflutter with ballet performances, improv groups, creative workshops, art galleries and more.

When asked why he chose South Main Street, Aulton’s answer was simple: “This is the coolest part of town — it’s where the action is starting to happen.”

Increasingly dubbed the “SoMa Art District,” the unassuming region south of downtown is becoming a major destination for families, students, working professionals and more. It won’t be underrated for long.

Depot Avenue (SoMa’s sister street) is a major transportation nexus! Built in 1860, the historic Depot Building for which the route is named was fundamental to Florida’s economic development, supporting agriculture, mining, tourism and other industries. Popular local bike paths like the Gainesville-Hawthorne State Trail are built over a network of old railroad tracks.

In conjunction with the Depot Park revitalization, the City of Gainesville’s Public Works Department recently embarked on a major reconstruction of Depot Avenue.

“The Depot Avenue area is becoming a place people want to stop and enjoy (as) opposed to an area people travel through,” said Public Works Department Director Teresa Scott.

The enhancements will provide more robust infrastructure and improved safety, connecting East Gainesville neighborhoods, downtown and the University of Florida.

Excited about the future?
Contact Project Manager Andrew Meeker at 352-393-8205 to learn more about how the Gainesville CRA is helping revitalize the South Main Street corridor through community visioning, façade grants, design support and more.

NATHALIE MCCRATE is a project manager at the Gainesville CRA. An active advocate of all-things-cool about Gainesville, she previously served as marketing coordinator for the UF Sid Martin Biotechnology Incubator, student ambassador for Google and as an organizer for TEDxUF. Nathalie graduated from UF with a bachelor’s degree in public relations and a minor in entrepreneurship.