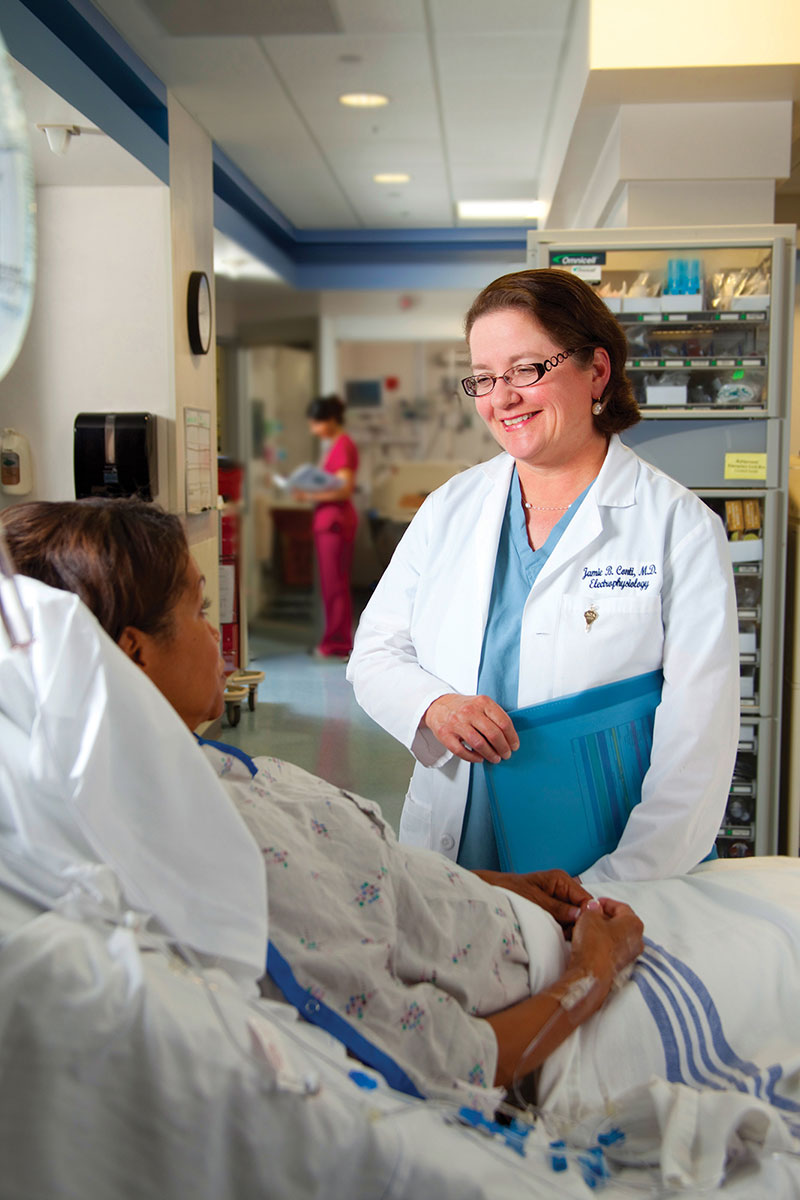 A Brief History of Health Care in Alachua County

The atmosphere of Florida is a medicine that has cured thousands of patients,” a Daily Sun promotional piece wrote in 1898. At the time, the city directory listed physicians, dentists and “druggists,” but no public hospital or clinic. Rapid growth after WWII, in conjunction with the founding of the College of Medicine at the University of Florida, would transform Gainesville into a 21st century leader in medicine and research.

Prior to the 20th century, doctors like Robert and Sarah Robb (the latter, Alachua County’s first female physician) either used a small number of overnight beds in their homes as clinics or hospitals, or they drove their horse and buggies to pay house calls to ailing patients. This “country doctor” treatment continued into the early 20th century.

Private homes were also used for convalescence. Florida’s salubrious climate attracted tuberculosis patients, who arrived by train to be treated in Gainesville. One of the most famous was the Odd Fellows Home and Sanatorium, completed in 1897. The massive brick building boasted wide verandahs and was the largest structure in the city at the time.

In 1921, the state created the Florida Farm Colony for the Epileptic and Feeble-Minded to segregate and treat developmentally disabled patients (the site of today’s Tacachale). But there was still no public hospital. The city and county combined financial efforts and in 1928, the Alachua General Hospital (or AGH, as it was known) opened with 58 beds. Situated near downtown, the building served as the nexus for the community’s medical needs for decades. Many Gainesville residents were born and saw their last days at AGH. President Truman approved a Veterans Administration hospital in 1945, but it was not until 1964 that construction actually began on property adjacent to the University of Florida. The facility held 480 beds and was five stories tall. The VA was renamed the Malcolm Randall VA Medical Center in 1998, after its director retired after a 59-year career in administration of veterans’ health care services.

The University of Florida opened its teaching hospital in 1958, focusing on research and education. In 1965, the hospital was renamed the W.A. Shands Teaching Hospital, after the state senator who fought to place the state’s first public medical school in Gainesville.

The 1970s witnessed what one local reporter termed a “medical arms race.” North Florida Regional Hospital opened in 1972, to much opposition from AGH board members. Proponents of each institution tried to differentiate their approach to health care: AGH billed itself as a community hospital; Shands led the way with its research, education and teaching; and North Florida was a modern facility with cutting edge equipment and care.

AGH attempted to compete, incorporating itself as an independent not-for-profit hospital in 1977. Shands also evolved, becoming a private company in 1980 (though retaining its close ties to the University). In 1983, Santa Fe Medical purchased AGH, ending Alachua County’s 56-year involvement with the hospital.

As its buildings aged, as doctors began dividing time at North Florida and as the downtown sector saw a decline, AGH struggled to attract patients. Shands HealthCare, Inc. purchased AGH in 1995. But efforts to revitalize the downtown hospital weren’t enough and it eventually closed its doors in 2009. The community held a strong emotional bond with its first hospital and many residents described a feeling of loss after it was demolished.

Today, UF Health and North Florida Regional Healthcare collectively employ over 14,100 people. Gainesville’s economy has grown from its roots as an agricultural and educational center. From horse and buggy doctors, to boosterish promises of vitality and health, to advanced research and treatment, medicine at home has taken a primary position in Gainesville during the beginning of the 21st century.