School Board of Alachua County 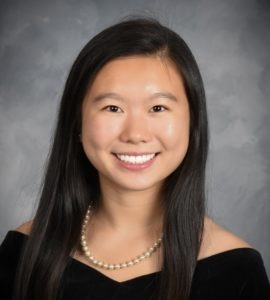 The U.S. Department of Education has announced that Buchholz High School senior Helena Jiang has been named one of just 161 U.S. Presidential Scholars in 2020.

“These exemplary young people have excelled inside the classroom and out,” said U.S. Secretary of Education Betsy DeVos in a news release about the selection. “And, while they are facing unprecedented challenges as they graduate from high school into a world that looks much different than it did just a few months ago, their determination, resilience, and commitment to excellence will serve them well as they pursue their next steps.”

Scholars are chosen each year based on excellence in academics, arts or career technical education. This year 121 students nationwide were selected in the academic category, including Jiang. In addition to top scores on college entrance exams, academic scholars are also chosen based on school evaluations, transcripts, essays, community service and leadership.

The prestigious program was established in 1964 to recognize the nation’s top performing students.

The U.S. Department of Education says the Presidential Scholars Class of 2020 will be recognized this summer ‘as public health circumstances permit.’

This honor is one of many that Jiang has earned during an illustrious academic career with Alachua County Public Schools. Some of her more recent accomplishments include:

“Helena has been a shining star in this district for years,” said Superintendent Karen Clarke. “We’re so proud of the national and even international recognition she’s earned, and we know she will go on to accomplish great things when she graduates from Alachua County Public Schools.”