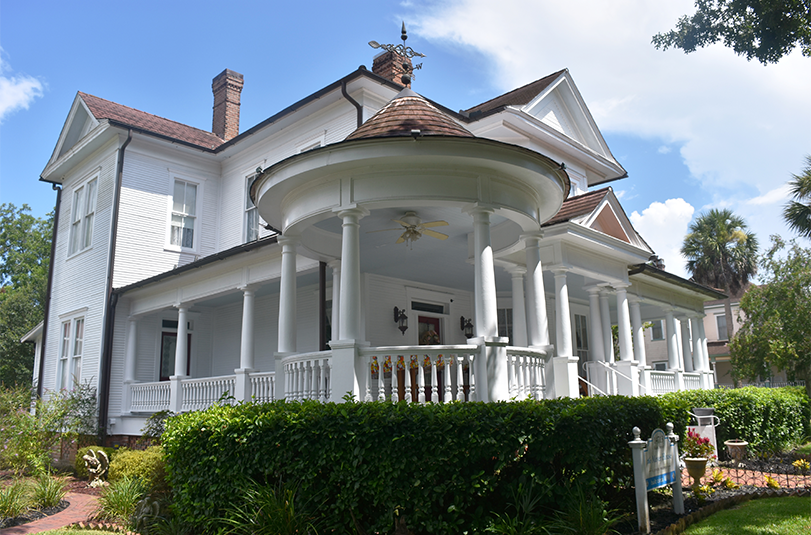 Country Charm coupled with a vibrant business community is a mix envied by many small cities. And that mix exists right here in the city of Alachua.

Described by those who live there as a walkable community, business friendly and a town with a heart for volunteering, Alachua has something for everyone.

“There’s a quality of life here you can’t get in other places,” said Mayor Gib Coerper. “Moving to Alachua in 1973 was the best move I ever made in my life. It’s rural setting, and the people are extremely nice.”

Alachua might not exist if not for the Savannah, Florida and Western Railroad, which bypassed the already existing community of Newnansville in 1884 when laying track. The railroad picked a spot about a mile to the south. It became Alachua, and Newnansville died.

Officially incorporated in 1905, Alachua started out as a farming community. Growth boasted three hotels, two banks, various stores, waterworks, an electric light plant, cotton gins, grist mills and bottling works. A telephone connection was erected to other cities for its 1,100 people in 1925.

Main Street was originally a dirt road lined with trees running through the center of town. On Saturday, local farmers would travel to town with their families in order to buy food, nails, cloth, shoes – you name it.

The opening of the Copeland Sausage Company in 1928 created a tremendous economic boost for the city and surrounding area.

The opening of the Hitchcock grocery store in 1945 was also a significant milestone for the city. The family’s first store was actually in Pahokee and was operated for just a year by Alan Hitchcock’s father after coming home from World War II. Hitchcock’s was the place to go for quality customer service and to get the best meat.

“My dad made the meat department famous. It had people coming from miles around,” said Alan Hitchcock who worked at the store himself. “We took a little extra pride in it. We had traditional cuts of meats, and we still hand-cut a lot of our meats unlike other places.”

The business was sold two years ago. Today, there are still 10 Hitchcock grocery stores in Florida.

In 1953 the parents of DeeDee Smith, wife of former State Senator and local attorney Rod Smith, bought a farm off of Bellamy Road, the oldest road in Alachua.

“I grew up and I knew everyone. It was like a family,” said DeeDee Smith. “It was a small town then. Everyone knew everybody. You had a good life. You don’t know the difference in wealth between people. It’s a great place to grow up.”

Because of the good life, the Smiths decided to raise their three children in Alachua. Now their grandchildren visit the farm.

Things changed for the city in dramatic fashion with the collapse of the Copeland plant in the 1970s. But that occurrence helped shape the Alachua of today, that mix of small-town charm with a vibrant business community.

“Since then the leaders of the community committed to making the city better,” said Coerper. “They never wanted the city to be put in that position again.”

The city commission began a program to expand its utility system and to rezone the land that later became Progress Corporate Park and the Waco property in order to attract new businesses. This program plus the completion of U.S 441 and Interstate 75 back in the 1960s gave the city the resources it needed to get back on its feet.

The Progress Corporate Park was purchased in 2000 by local business leaders. The University of Florida developed and locally commercialized its technologies at the Sid Martin Biotechnology Incubator in the park. The business community raised millions of dollars and worked alongside Santa Fe College to create the Perry Center for Emerging Technologies which trained high school graduates for local biotech employment. The Waco property was purchased in the 1990s. Soon thereafter, businesses like Dollar General, Wal-mart, Sysco and many other corporations built stores on the property.

Downtown was revitalized with the Swick family’s 300 acres of land located one block from Main Street. The Downtown Redevelopment District created an extension of downtown Alachua with sidewalks, street lights and brick pavers. In addition, Main Street itself is now a curved street with its trees and decorative lighting according to Coerper.

“The sounds of a Saturday morning of parents with the kids in the community park right in the heart of town is music to my ears,” he said. Smith agrees.

“We have a beautiful downtown area that’s vital to our community,” said Smith. “I’m proud of the community it is and the way it’s grown.”

And Alachua is looking for further growth very soon. Project Legacy is the chance to expand Alachua’s recreational prospects by 440 percent with the purchase of 105 acres of land adjacent to the Hal Brady Recreation Complex, a nationally recognized center which services more than 100,000 visitors annually.

The city of Alachua has until June 30 to raise $1.2 million to acquire the land. Great progress has been made.

“We’re over halfway to the goal,” sad Adam Boukari, the assistant to the city manager and supervisor of Project Legacy. “We’ve been meeting with a lot of people, a lot of organizations. This isn’t just a project for work; it’s project for community. It will affect lives forever.”

Although the project’s advocates have been very busy with donors, more money needs to be raised.

“Right now people are donating $5 to thousands of dollars. We would love support from anyone. Any support of any participation and level is welcome,” Boukari said. “A donation of $1 is one more dollar than we had.”

Or as Coerper puts it, “The fives, 10s and 50s are just as important as the thousands.”

Alachua has doubled in population from 5,000 to 10,000 people in the last 10 years. Project Legacy will provide more cultural and recreational opportunities to all residents and a way for Alachua to continue its wonderful balance.