The Village at Gainesville

From the very beginning, Alachua County has been filled with natural wonders and a storied history. The area was originally settled by the Timucuan Indians and from them the county receives its name. Sinkholes, such as the Great Sink in the Alachua Savannah, now Paynes Prairie, were called “chua.” Eventually, mapmakers began naming the area “Allachua” or “Lachua.”

In 1513, the Spanish landed in what would become Saint Augustine, and the explorer Juan Ponce de Leon began the first European exploration of Florida. He was followed by Hernando de Soto in 1539, who marched north from Tampa Bay with the hopes of finding fame and fortune. When he reached the Alachua County area, he encountered the Potano Indians, a tribe of the Timucuans, and won a 14-hour battle against them.

After de Soto’s year of destruction and plunder, Catholic priests and Franciscan missionaries from the parish at Saint Augustine traveled to the interior to set up missions, with the hopes of converting the Native Americans to Christianity. By 1655, there were 38 missions, including a large cattle ranch, Rancho de la Chua, on the northern edge of the Alachua Savannah.

As the 1700s dawned, the French, Spanish and English were struggling for dominance of the area. After the English destroyed eight missions in 1704, the others quickly declined. By 1708, all had disappeared. In the 1700s, the Timucuan civilization, decimated by disease and slavery raids, became extinct, and Creek Indians from Georgia and Alabama migrated into the area. The various tribes were eventually known as the Seminoles and began establishing villages throughout Paynes Prairie.

In 1763, the Spanish ceded Florida to England in order to regain Cuba, which the English had captured during the Seven Years’ War. During the Revolutionary War, Florida remained loyal to England. As a consequence, many English tories moved to the region; yet, Florida was given back to Spain in the Treaty of Paris in 1783.

The American naturalist writer, William Bartram, traveled twice to the Alachua County area in 1784. In April, he visited the Seminole tribe in Tuscawilla, near present day Micanopy, and explored the Alachua Savannah. He returned over the summer and toured Kanapaha, Manatee Springs and the Suwannee River. Bartram was awed by the beauty of the area, from the alligators and sandhill cranes to the orange groves. The account of his journey through the southeast was published as “Bartram’s Travels” in 1791.

In 1821, Florida flew under its last flag when Spain ceded it to the United States. Sparsely populated and dealing with the Second Seminole War, it took years for Florida to move from territory to statehood. Alachua County was created on December 29, 1824, and stretched from the Georgia border to the Gulf of Mexico. Micanopy, named for Seminole Chief Micanopy, and Fort Brooke, were the first two towns.

The Bellamy Road, a federal highway which connected Saint Augustine and Pensacola, was no more than a dirt road. But, it passed through Alachua County. As a result, more settlers began arriving. In 1828, Dells, now Newnansville, became the county seat. The cash crops were cotton and sugar cane, most of which were planted and harvested by slave labor. In 1832 and 1834, Alachua County was reduced by two-thirds, when Columbia County and Hillsborough County were created.

At the end of the Second Seminole War and the passing of the Armed Occupation Act of 1842, settlers once again began streaming into Central Florida. The act stated that any male over 18, or the head of a household, could obtain 160 acres by living on it for five years, building a house and clearing five acres. Florida then applied for statehood and on March 3, 1845, became the 27th state.

Alachua County was reduced in size again in 1843, with the creation of Hernando, Levy and Marion counties. Newnansville was still its largest town, but, as with all of Florida, it remained largely agricultural and suffered from a lack of roads. Businessmen and plantation owners led by Senator David Yulee pushed for an extension of the railway system. In 1853, the Florida General Assembly chartered the Florida Railway, which would connect Fernandina with Cedar Key and Tampa. The proposed route bypassed Newnansville. So in 1853, the Alachua County Commissioners voted to move the county seat to the newly named town of Gainesville.

The first courthouse was completed in 1856 and the first train arrived on April 21, 1859. Without the railroad, Gainesville and Alachua County would not be what it is today. The railroad brought industry to Gainesville and the county continued to increase its production of cotton and livestock. New towns began cropping up, such as Waldo and Archer.

Everything changed with the start of the Civil War in 1861. On January 11, 1861, delegates to the Convention of the People called by Governor Madison Starke Perry voted to secede from the Union and join the Confederate States of America. Alachua County immediately raised troops and eventually became the food depot for Central Florida. No major battles were fought in Alachua County, but two skirmishes occurred on February 14 and August 17 of 1864. The end of the war in 1865 brought more changes for the county.

The African-American population increased exponentially after the war and joined an already strong community of freed slaves in Gainesville. They started businesses and churches and quickly became leaders in the community. One example is Josiah T. Walls, the first African-American Congressman for Florida. In 1868, the Union Academy was established by the Freedmen’s Bureau and became a beacon of education and opportunity for the African-American community.

Up to the turn of the century, Alachua County continued to prosper and grow. The railroad, citrus and phosphate industries changed the face of Gainesville and the county. More towns, such as Newberry and Hawthorne, sprouted up along new railway lines. Even in spite of the Great Freeze of 1894-1895 that destroyed most of the citrus groves in the county, entrepreneurs continued to diversify their businesses and grew cotton and vegetables to be shipped north. 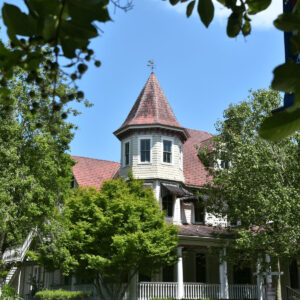 The East Florida Seminary, established in 1866, and Union Academy continued to flourish. Yet, a public school was still needed. In 1900, the Gainesville Graded High School was built. Jim Crow Laws enforced segregation, so Union Academy was still the only school for African Americans. Education changed Alachua County when in 1905 Gainesville was chosen as the site for the University of Florida. It opened with only 102 students, but grew exponentially over the next century. The university was one of the main reasons the area was able to weather World War I and the Great Depression. East Florida Seminary merged with the university. Union Academy closed in 1923, when Lincoln High School was opened as the public school for African Americans.

Post-World War II and the G.I. Bill brought veterans and their families to the county as they pursued an education at the University of Florida. By 1970, the county had over 100,000 residents, the majority of them living in and around Gainesville. Today visitors and new residents alike come to Alachua County because of its historical and natural sites, support of the arts and education and a growing economy.

The Village at Gainesville